Not me, obviously. I’m nowhere near as strong as an ox. But I’m sure there are people who are nearly as strong as a pretty weak ox.

I’d have myself down as almost as strong as an overly aggressive stoat. Three months ago I was probably at about the same level as a sickly vole, so this is actually a fair mark of progress.

To give you a run down of what I’ve been up to:

– Two to three gym sessions a week with Deepak, where I lift things, pull things, punch the space around Deepak’s face, lift other things and make manly noises. The manly noises are by far the most improved aspect of my physique; I have moved from pre-pubescent squeak to meek roar.

– Climbing. I try and get in a couple of bouldering sessions a week, although this is almost certainly placebo exercise. Whilst I can now climb some moderately hard things, I  spend a far greater proportion of my climbing time panting, having a lie down, feigning injury, making up climbing terms, abusing others, buying KitKats and asking what the music is.

– Football. After a 5-year mini-break from the beautiful game I’ve finally got back on the pitch (twice), and have lasted 5 and 10 minutes respectively before being completely, utterly broken down to a cellular level. I haven’t been asked to play for a couple of weeks. This might be for the best.

– Bricking it. They keep putting up more zones for the Rat Race and each looks more sadistic than the last. Search rat race dirty weekend on Youtube to get an idea. Pray for me.

Basically, it’s been like a Rocky montage, with the exercise bits replaced by whingeing and without any real improvement over time.

So yesterday I decided to test my progress by taking on the Major Series Midlands 10k, with a few mates from work. In short, this is a 10k over all kinds of funky terrain, mostly based around mud, with various army-looking types shouting at you while you inhale large volumes of effluent.

Needless to say, I was somewhat apprehensive. At least it was gloriously sunny and a great venue – I can think of worse places to die.

My first taste of things to come was in the warmup. My warmup for training usualy involves cracking a few jokes and maybe eating a Twirl; this warmup contained more exercise than I generally do in a week. I was shattered by the end and nearly vomited on the start line, which was not a promising sign.

We got round to the first obstacle, a small jump over a log into water, in good time, and I felt confident until I found myself ankle deep in water which smelt strongly of the country, sludging through mud and large quantities of sheep shit. This was only the beginning.

In the next vat of crap, now waist deep, I had a slight coming together with an underwater root. Retarding my purposeful forward stride, the root coaxed all the momentum from me until the only place left to go was back. Into the waist deep shit-water. Slowly.

I emerged from the pool and rejoined my kilt-wearing accomplice looking and smelling like a turd, which would explain why he was so keen to bolt ahead.

There’s a lot to be said for running with a Scotsman in a kilt. First, it deflected attention away from my turd-like qualities. Second, you here a lot of good ‘true Scotsman’ jokes from the crowd (he wasn’t, thank fuck.), which makes you think less about the pain and humiliation. Third, after soaking with mud and shite a kilt is indistinguishable from a skirt, which caused much confusion and hilarity.

The rest of the course progressed in much the same fashion – drown in shit, have a laugh, weep inside, repeat. There were also some exciting obstacles involving haystacks and really quite dangerous slip’n’slides, and some with barbed wire, which was mean.

At one point I lost a shoe and had to dig in the mud to find it.

Having said all this, once I hit the finish line I felt incredible. And unclean. But mostly incredible. I would urge anyone to give something like this a go.

There is also the added bonus of having to go back to London and get on a tube smelling like you’ve fallen into a slurry tank. I had my own carriage on the District line and got over 8 funny looks- I might try this more often. 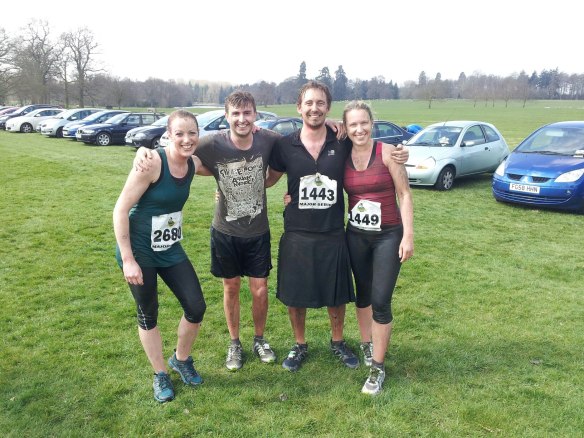 So the key takeout points if you’ve just skipped straight to the end:

2) I have done running

4) I will definitely still die in May

But enough of that, let’s talk about me.

Only kidding. I can’t be arsed.

So as it stands North Korea is still getting ready to launch some kind of nuke – possibly the nuclear equivalent of a spoon, but nonetheless, fucking nuke! Fuck! Panic!

We have also buried, at mind-boggling extravagance, an old lady who used to be famous but who by all accounts was just a bit racist in her latter years. And it was on telly. And the radio. And there was a webcast. And they closed roads. And put up signs. So that was rational.

Then somebody blew up some pressure cookers in Boston, which, like all bombings, was an utterly heinous and low act. It has also highlighted that the word ‘terrorism’ has now been so successfully hijacked to mean ‘brown people what wear dresses and have beards like’ that the President of the United States has to refrain from using it when an act of blatant terrorism – in the true sense – is carried out by somebody who might not be a Muslim.

It’s genuinely remarkable that the new conception of terrorism is totally reliant on the dichotomy of western democracy and fundamentalist Islam, of ‘us’ and ‘them’, and highlights just one of the many attempts to hegemonise the language of terror, and thereby create justification and truth (read: get away with anything), committed by western powers since 9/11.

Oh and scores of Iranians died in an Earthquake yesterday but nobody cares for the exact reason listed above.

Well that was fucking bleak wasn’t it? I bet you were expecting something funny, or at least something with funny pictures to hide the lack of content. Sorry. I’ll try harder next time.

It’s just that I got hit in the leg by a softball (misleading title, it transpires they’re actually made of hard) tonight, which has put me into a cynical mood. I’ll probably have an ice cream tomorrow and then write at length about how great the world is.

I think I’m quite fickle.

To apologise for this particularly wank post, here is a link to a blog with pictures of otters. It is both amusing and quite high brow.

And here is a link to some Irish people lampooning songs by taking the lyrics literally, with hilarious results.

How much more coverage do we need?

So to summarise the main news of the day, an 87-year old lady has sadly died of a stroke. And the country has lost its shit about it.

The BBC had a live blog going by about 10am. A live blog. For the death of an octogenarian. A headline would probably have done, given that the person was formerly of some note. A live blog implies developments – uncertain events unfolding at great pace, with people allowed to text in their completely irrelevant thoughts on the matter.

If we were expecting a resurrection, or perhaps the start of a terrifying Thatcher-zombie epidemic, that would have warranted a live blog. This did not. What else can they write apart from hourly updates involving variations on ‘she’s still dead’?, with Wayne from Hartlepool tweeting in to say ‘I think it is bad/good that she is dead’.

Did wear awesome jumpers though.

The Guardian have immediately ploughed in with a pretty low, thinly-veiled hatchet job containing the least genuine use of the phrase ‘there should be no dancing on her grave’ ever committed to paper.

If you flick over to the Telegraph you would be forgiven for thinking that Princess Diana had come back to life and then died again.

I presume the Mail has stopped working altogether, or else tomorrow’s edition will just be a small bucket of tears and semen.

Eww. Sorry. Too far. I apologise, I’m in a fairly ropey mood anyway after playing football tonight and having to mark my boss; which was a lot like marking a racehorse. My legs hurt.

Also, all of the TV networks seemed to have Thatcher memorial shows cut and ready to air by 7pm, which is a wee bit sick. The BBC one was voiced by Andrew Marr – you somehow doubt that was filmed too recently unless his powers of recovery are phenomenal.

If I knew that somebody had already lined up a show about my death whilst I was still alive I think I’d probably do something drastic like get a swastika tattooed on my chin, or punch a nun, just to show the presumptuous tossers.

All this bullshit, this torrent of love and hate, hyperbole and hysteria, is just wrong. It’s irrelevant. It’s hypocritical and it’s demeaning to everybody.

This whole practice of forgetting about people until the very moment they stop breathing defies logic, and makes us all look a bit petty.

The difference between telling the truth and telling an outright lie is much less clear-cut than once presumed, it has been claimed.

Whereas previously one would make a blatantly false statement and somebody else would turn round and say ‘That is a lie’, and one would have to accept that it was a lie, possibly resulting in a lengthened nose, the new trend is to simply repeat lies loudly and often in the hope that everybody will just give up arguing and say ‘Fine, it isn’t a lie’. 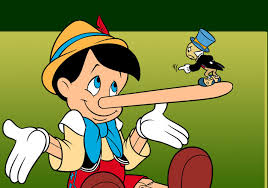 Way ahead of his time.

Politicians, who count amongst their ranks some of the premier trailblazers of the ‘true lie’ movement, have offered out a couple of excellent examples today.

First, Iain-Duncan Smith, the man who just doesn’t know when he should stop trying to do this whole politics lark, declared with a completely straight face that he could certainly live on the £53 a week that his genius welfare reforms will force some in this country to live on.

This is a good example of the true lie technique know as ‘complete-yet-tough-to-definitively-prove horseshit’- it helps defend a set of actions which are completely indefensible by making a ridiculous claim which the claimant knows he/she will never be called out on.

To call Iain-Duncan Smith out on this, sign the petition here.

Most people then seemed to agree.

That, my friends, is the pinnacle of lying. Hats off to you Grant Shapps, you terrible, cunning bastard.

The final manoeuvre was a somewhat less skilled affair emanating from the world of football. Deploying what is known in the trade as the ‘half Stalin’ tactic, Sunderland Football Club stated (of their new boss Paolo Di Canio):

“To accuse him now, as some have done, of being a racist or having fascist sympathies is insulting not only to him but to the integrity of this football club”

Despite Di Canio saying in an interview that he was a fascist. Despite this being on record. Despite receiving bans and fines for giving fascist salutes during football matches.

This is similar in theory and efficacy to walking into a police station with a friend, announcing that you are going to stab your friend, stabbing your friend, then denying that you stabbed your friend. Sadly, however, everyone will probably just forget about it by tomorrow.

So there you have it. Lies are now as good as truth and total bastards rule the Earth.