Romani people are tonight united in celebration after being singled out as the ethnic group most likely to be blamed for all of society’s ills in 2013.

As it transpired that there were more Roma people in the UK than expected, but a whole lot less than say, Britons in Spain, media sources rushed to report on the story in a way that hid the racism behind mounds of statistics whilst making sure to use phrases like ‘crime wave’, ‘child abduction’, ‘poverty’ and ‘shifty-eyed layabouts’. Government sources were quick to remain silent and very much open to throwing the Roma to the wolves.

The group are a surprise winner of the award, which has a rich and varied history in Britain and includes the French, the Irish, anyone who isn’t white, anyone from east of Belgium, and bankers. It was thought that because very little is known about Roma gypsies in this country, people would confuse Roma for Romanians (who won the award back in 2011), Romans (who unlike most other winners did actually invade Britain once), or the Italian football club of the same name, who are yet to attract the ire of the great British public. 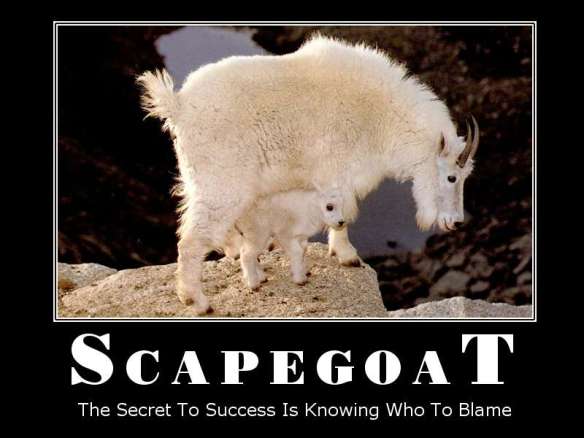 The original scapegoat was an actual goat.

However, the public consciousness on Romani people has been stirred recently after a spate of strikingly convenient tabloid revelations linking them to kidnapping. In Greece, a particularly blonde, particularly white girl was found living with a particularly fat Roma couple, which obviously made headline news in the UK. Obviously.

Then in Ireland another white girl was found living with a Roma family and was taken away, but then it turned out she was actually their actual daughter so the papers sort of dropped that one like a stone. Obviously.

When considering both the single story of kidnapping and the new figures, the only natural conclusion is that the Roma represent a terrible threat to British life. As a result, and based on previous winners’ experiences after being named ‘Scapegoat of the Year’, Roma gypsies can expect to be labelled with the following accusations and stereotypes:

They can also expect visits from the EDL, corralled by whichever braindead toad is leading that sorry shower of arseholes these days, although it is understood that they are still having trouble digesting the Roma/Romanians/Romans/Roma FC distinction, so a football stadium and an extinct society could get a bit fucked up first.

Accepting the award, shortly before being chased from the venue by men with flaming torches and pitchforks, a spokesman for the Roma community gave a brief speech:

“You people are fucking weird”, he said.

1 thought on “Roma community celebrates ‘scapegoat of the year’ award”