Nigel Farage and his band of people who are only saying what everyone else is thinking would like everyone to know that they have an MP and a song and they’re going all the bloody way to Downing Street. 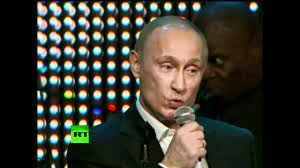 Well it works for Vladimir

The party, with an average gender of man, and average skin colour of white and an average emotional state somewhere between drunk and angry, have grabbed headlines in the past week by overcoming all odds and gaining an MP in a constituency where their candidate was already the MP, but used to be in another party. If they were on a football team, they would be the equivalent of Santiago Vergini.

Just wanted an excuse to get that in, sorry.

To celebrate snaring approximately 0.2% of the seats in parliament, supporters of the new force in British politics immediately released a song with such classic pop themes as the work pension scheme, tax on the minimum wage and an old white bloke who supports a far right party singing in a Jamaican accent. I’m not going to link to it because it’s one of the more cringeworthy things I’ve ever forced myself to sit through, but suffice to say I thought it was a piss take for quite a long time.

UKIP are now of the opinion that it’ll get to number one, which should give you a fairly good idea of the kind of minds attracted to the organisation.

What they have done, I hope, is ushered in a new dawn of political broadcasts through the glorious medium of song. Whilst undeniably a flying pile of wank, it is still infinitely more watchable than any party political broadcast that has ever been created. For the uninitiated, they go like this:

Scene 2: Person visits old person or minority, talks about something abstract which they then shoehorn back to their party

Scene 3: Party leader says something, slow mo of leader with ‘normals’ to show that they’re down with real people

I feel like these inane 4 minute wastes of airwaves could be jazzed up a bit if everybody went down the musical route. As a starter for 10, for any political PR types reading, I’ve come up with a verse or two for each of the big 3. I think these would go down a storm and also convey key party ideologies, so feel free to use them.

Hello? Is it me you’re looking for?
What do you mean you don’t know who I am? I’m Ed Miliba…hello? Hello?
Ed? Balls. They’ve hung up.

Lib Dems – to the tune of Help! by the Beatles – sung by Nick Clegg

Just the chorus, sung over and over again, maybe with a couple of sobs thrown in for good measure.