As David Haye and Dereck Chisora turned a press conference centred around a boxing match into the precise opposite, consternation and confusion reigned amongst the boxing elite.

“I’m flabbergasted”, admitted Sir Ronald Digby-Smythe, head of the AGP (Association of Gentlemanly Pugilists). “As we all know, boxing is a noble sport born of great intellect and witty riposte, so for it to descend into base physical violence is an unseemly shock to the sport and indeed to the wider world. 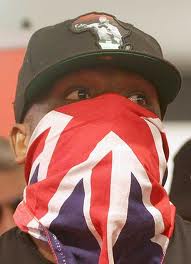 Chisora speaks fourteen languages and once beat Jacques Derrida in a game of Scrabble.

“I recall the night when Muhammad Ali delivered such a stinging rebuke to Joe Frazier’s attempted verbal sparring that the latter was quite unable to regain his footing, and the poor chap was never seen in high society again. One had to admire Ali’s wordplay though, the way he danced around Joe’s arguments before delivering ferocious counter-arguments was simply a joy to behold.”

It has oft been written that boxing is truly the most cerebral of sports. There are as many boxing styles as there are boxers, from the solid “Iron Fist” of Vitali Klitschko, which largely revolves around soaking up the bulk of his opponent’s arguments before delivering a crippling one liner which renders the victim unable to continue, to the controversial ‘chatty’ style of Mike Tyson, which left at least one enemy complaining of having his ear chewed off by the end of the bout.

It is well known, of course, that Noam Chomsky attempted to win the super-heavyweight division back in the mid-1990s, only to be deterred by the mental alacrity of Frank Bruno before sliding into a nondescript career of ‘philosophy’ or something equally vulgar.

It is now up to Haye, whose most famous work, “Biblical Pseudochronology in the Writings of Charles de Gaulle” has sold over 5 million copies worldwide, and Chisora, the incumbent children’s laureate, to repair the damage caused by such unseemly behaviour. Even if, as Sir Ronald Digby-Smythe contests, “The argument was over whether Levinas’ treatment of “The Third” was a continuing threat to traditional self/other dichotomies”, there is still much to be done before the world can come to terms with two boxers coming to blows.