French riot police have today been told “très bien” by Nicolas Sarkozy’s Ministry of Frenchification after making one of the most stultifylingly French demands ever witnessed in human history.

The weapon-wielding violence enthusiasts have expressed their complete outrage at a law which bans them drinking at lunchtime. Yes, you did read that correctly. The officers are apparently incandescent with rage at being told they can no longer enjoy their customary beer or wine with lunch whilst on duty, a practice which formerly involved large quantities of fine Merlot and a couple of cheeky Lafites being carted along in the riot van, to be cracked open in the street. Whilst they were working. On protests. With weapons. And protesters. In a climate of hostility.

In a statement, spokesman for the police Pierre du Pierre announced the collective disgust: “If a French man cannot enjoy some fine wine, some bread smeared in a paste made of cruelty and entrails, and somebody else’s wife over lunch, then what is the point of living?”

“Henri! Bring me my cravat.”

Outdated national stereotypes aside, perhaps the riot police have a point. They might argue that French culture is built around casual afternoon drinking, and they might well win such an argument, but they should beware of shouting about it too loudly lest their British counterparts get wind of it and start demanding Jägerbombs with every fag break. Our riot police are probably violent enough without any chemical encouragement. Couple this with the fact that us Brits are notoriously bad at lunchtime drinking and there are compelling reasons why this debate ought to stay very much on the other side of the Channel.

I wasn’t around for the Eighties and too busy being a child to remember much of the early Nineties, but by all accounts this was the end of a golden era of British luncheon beverages. This was also the end of an era where literally nothing got done after 2pm because everybody was asleep or fighting. A relative once recalled her 21st, some 30 odd years ago, which involved “a couple of lunchtime drinks”. When pressed, the exact figures were 9 vodka and lemonades and three shots. In a 45 minute lunch break. She doesn’t remember the rest except vomiting into a stairwell down 22 floors and being found in the toilets at about 7 by a cleaner who assumed she was dead.

And they say our generation has drinking issues.

Staying with great British traditions, millions of us are off to partake in the traditional Easter weekend activity, queueing! Thousands of cars will glide onto the main roads and simultaneously stop for no reason, leaving people free to enjoy the picturesque settings of Junstion 26 of the M25. The weather is fantastic, and people are really going to make the most of it by slow-cooking themselves in an old Ford Mondeo for the majority of the weekend.

Whatever you’re up to this Easter weekend, I hope that Jesus brings you all the chocolate you could wish for. Poor guy is probably kicking himself for choosing the whole messiah business over a more lucrative career in confectionery. The man sells more creme eggs than Bibles.

“Hypocrisy and double standards”. These tenets are actually written into the UN Charter, just in Latin so that everybody thinks it means something like “Peace and kittens for all”.

In recent days, the entire UN, namely France, the US and the UK, have arbitrarily decided that it doesn’t much like the violent rumblings in Libya and has come up with a masterplan: prevent the aerial bombardment of Libyans by aerially bombarding Libyans.

If the majesty of this plan wasn’t quite evident enough, then the added spice of shelling Gaddafi-friendly tanks, which are approximately the size of a tank, with smart bombs so smart they eviscerate everything in a 200ft radius should be enough to make even the most venerated military tactician doff the proverbial cap. 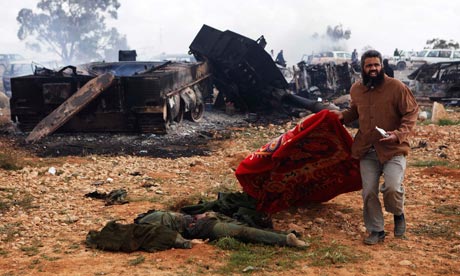 "We only got the tank. Those cars were already on fire."

The justification is stunningly arrogant: “[The Libyan opposition have] expressed a clear and overwhelming wish for Gaddafi to go and we agree with that too.” – David Cameron

Fair enough, Dave, but it’s not the Libyan people en masse; a significant minority must still be loyal to the scruffy old tyrant else he’d be out on his arse already. In addition, DC himself isn’t exactly the most popular PM at the moment, but as yet I haven’t heard the unmistakable roar of an F-16 haring towards Downing Street recently. There’s still time.

Of more pressing concern than whether Ban-Ki Moon will crack out the jets next time students take to the streets is the question of what on earth the UN is playing at. This, of course, is a question which has followed the organisation since roughly the very beginning. The majority of the time the international community is perfectly happy to sit back and have a nice cup of tea whilst oppressive regimes tear their people to shreds. In Rwanda they actively stood there and watched, and that’s not an isolated occurrence.

So the incisive international action in Libya seems a little baffling, especially given that Yemen, Syria, and to a lesser extent Saudi Arabia are also currently engaged in enthusiastically ‘repressing’ their own civilians. Apparently the UN doesn’t agree with those people.

The befuddling lack of any kind of consistency only serves to highlight that the whole institution stinks to high heaven when it comes to interventions. Whilst ostensibly an egalitarian forum for collective action, the major behavioural pattern effectively mirrors the whims and cares of the dominant states. Big guns like, big guns get. Big guns no like, Big guns veto. Simples.

“Col Gaddafi, we strike at you safe in the knowledge that the whole world is behind us. Except most of the world, but it’s okay because we can’t really pronounce them and they’re probably not important. I mean, pretty much all of them agreed with the whole no-fly zone thing but then I guess they didn’t see the obvious inference that we saw that by having a no-fly zone you automatically have to bomb anything that moves in order to enforce it, but I suppose that’s not their fault and we’ll just decide for them anyway and we’ve decided that the best way to stop things from flying is just to bomb everything on the ground in case it does start flying and breaks the no-fly zone rules, I mean you wouldn’t think tanks and buildings could fly but I saw an ant do it once so you can’t be too careful, know what I mean?”

The organisation is almost set up not to work; the security council and the veto are utterly ludicrous and do nothing except block majority-led consensus. The self-appointed permanent members effectively decide on all matters of international peace, and a no vote from any of them means no resolution and no UN backed action, which then leads to the big states going off and doing it anyway. Hi Iraq. Obviously this shuts out the rest of the world, unless you’re on the non-permanent committee that year, in which case you don’t have a veto anyway so you might as well be wanking furiously in the corner for all the effect your nation has on proceedings.

If there is to be a global forum for action on international peace, then fine. But let the whole world decide, and let it decide on the appropriate action too. Hold states who invade other nations without consent accountable, properly, and don’t let the big players get away with this cavalier bullshit.

The western powers have got a tentative agreement to stop the Libyan conflict being horribly one-sided, and have used that as an excuse to launch a bombing campaign against somebody they don’t like. The UN shows itself to be either a puppet to western whim, as it has this week, or incapable of holding the west to account when it goes on oil jollies around the globe.