5 days into Movember, the harsh reality of half the country toting moustaches has crept up on the nation’s women like poorly thought out facial hair on a man’s face.

Otherwise normal, well-adjusted men are sprouting itchy, disturbing mouth toupees, partly to raise money to fight prostate cancer and to highlight men’s health issues, but mostly because they think that moustaches are ace.

Men across the world are paying undue attention to the mirror, convincing themselves that ‘it’s really coming through well this year’, while their wives and girlfriends roll their eyes and reach for the nearest wine or absinthe, only pausing between gulps to say ‘Yes darling, it looks great’ through gritted teeth. 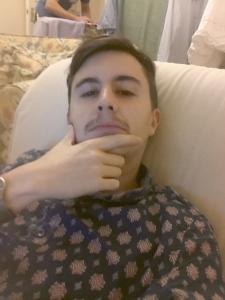 It’s coming through really well this year. I look like a dashing RAF pilot.

The Movember phenomenon has been a huge success in recent years, and experts believe that it is due to the unfathomable depths of self-delusion exhibited by all men. When you cut open any man’s brain, the part of his body responsible for emotions about facial hair and attempting to source chips, you will find only a small scroll, bearing three telling sentences:

Whilst the third line is what truly separates us from the animals, the first two are cruel evolutionary tricks designed to dupe the unsuspecting male into changing his appearance to resemble a rampaging sex criminal.

Studies estimate that the number of men in the UK who can actually grow a moustache worthy of the name is somewhere between four and seven, leaving 20-odd million deluded fantasists wandering the streets and creeping up the joint and wholeheartedly believing that they look like a dashing RAF pilot.

It’s not all bad news for ladies though – the end of November heralds the end of the ‘tache – usually after a relationship-threatening row after we become slightly too attached to our efforts – and then it’s into Christmas jumper and ‘putting on the winter weight’ season, where every man looks his plump, festive best.

P.S. I’ve definitely taken a slight run-up to Movember this year – it doesn’t usually look this good (and it still looks horrifying)

P.P.S. I might even provide regular updates and detailed, up close pictures.