5 days into Movember, the harsh reality of half the country toting moustaches has crept up on the nation’s women like poorly thought out facial hair on a man’s face.

Otherwise normal, well-adjusted men are sprouting itchy, disturbing mouth toupees, partly to raise money to fight prostate cancer and to highlight men’s health issues, but mostly because they think that moustaches are ace.

Men across the world are paying undue attention to the mirror, convincing themselves that ‘it’s really coming through well this year’, while their wives and girlfriends roll their eyes and reach for the nearest wine or absinthe, only pausing between gulps to say ‘Yes darling, it looks great’ through gritted teeth.

It’s coming through really well this year. I look like a dashing RAF pilot.

The Movember phenomenon has been a huge success in recent years, and experts believe that it is due to the unfathomable depths of self-delusion exhibited by all men. When you cut open any man’s brain, the part of his body responsible for emotions about facial hair and attempting to source chips, you will find only a small scroll, bearing three telling sentences:

Whilst the third line is what truly separates us from the animals, the first two are cruel evolutionary tricks designed to dupe the unsuspecting male into changing his appearance to resemble a rampaging sex criminal.

Studies estimate that the number of men in the UK who can actually grow a moustache worthy of the name is somewhere between four and seven, leaving 20-odd million deluded fantasists wandering the streets and creeping up the joint and wholeheartedly believing that they look like a dashing RAF pilot.

It’s not all bad news for ladies though – the end of November heralds the end of the ‘tache – usually after a relationship-threatening row after we become slightly too attached to our efforts – and then it’s into Christmas jumper and ‘putting on the winter weight’ season, where every man looks his plump, festive best.

P.S. I’ve definitely taken a slight run-up to Movember this year – it doesn’t usually look this good (and it still looks horrifying)

P.P.S. I might even provide regular updates and detailed, up close pictures.

…was my first thought on arriving at the race.

My initial folly was to equate ‘Greenwich Park Mo Run 10K’ with ‘Fun Run’, and assume that I’d turn up to see a load of stupidly dressed berks sporting moustaches of varying hirsuteness.

But no. Whilst there were indeed moustaches of varying hirsuteness (totally a word by the way), the moustaches were invariably located on people who were in fact runners first and comedy moustacheers very much second. There were people doing stretches, comparing racing gear, one woman was actually doing yoga, and many were comparing their pre-race training regimes and diets.

“Well I’ve happened across a granola which actually gives your muscles a full workout. From the inside. And I’ve run 12K a day for the last year just to be ready for this.”

My own personal training regime, espoused by many of my colleagues who’d also decided to sign up for said charity race, was a casual 3K on the treadmill a month ago and a lung-crushing 4K on Thursday night which genuinely left me considering an ambulance. My pre-race diet included, or should I say consisted entirely of, two pints of Guinness and a sharing pack of Pringles. Carb-loading like a champion.

For a while it looked like our corporate running team had really signed up for the wrong event, but then a rotund gent dressed as Adam Ant turned up and we collectively breathed a sigh of relief. It turned out the fun-runners were just being true to form and arrived nine minutes before the gun went off.

There are several things they don’t tell you when you;re running 10K for charity in Greenwich Park:

1) Greenwich Park is, in technical terms, fucking hilly. The utter bastards who set the route decided that we should run from the height of the observatory up top all the way down to river level, which by my rudimentary calculations is a vertical distance of four miles. Then they make you run back up it. Four times. One of the times isn’t even to get back to the top, because you had to run up the hill and then turn sadistically back on yourself and go back down. I made sure to give the smiling marshal at the top of this peak a suitably withering look each time.

2) 10K is, like, far. Certainly further than you’d otherwise ever conceive of travelling without some form of motor.

3) Your body is not your friend. I assumed that once it realised I was dragging it all the way round this course (Twice. Bastards.) that we’d generate a kind of Blitz spirit and pull together for the sake of staying alive. Wrong. My turncoat bastard left lung was trying to escape as early as 2K, leaving good old dependable righty with a lot to do. For some unfathomable reason my right shoulder decided it had better things to do around 7K, leaving me running like a drunken Quasimodo for a good portion of the race.

4) It does matter what you wear. £6 trainers from Cornwall’s favourite Eurosceptic goods emporium simply don’t cut it. What they do cut is your feet, which I have now renamed ‘The Blister Brothers’. They’re going on tour next year with their hit song ‘Sorry to burst your bubble’.

5) Encouragement will not be tolerated. “It’s only a tiny incline, you won’t even feel it!” she shouted gleefully. She had good reason to be cheerful, as she was not forced to run up this beast (twice) and instead just had to stand there and watch people embarrass themselves. This ‘incline’ caused one colleague enough distress to make her jettison her breakfast at the top, which I now regard as a stunningly efficient move on her body’s part.

“Well, this Weetabix is only really weighing us down. Fuck it, get rid.”

Cheerful lady was in fact so counter-productive that another colleague wasted both time and oxygen screaming something along the lines of “YOU RUN UP IT THEN YOU SMILEY BITCH!”, a sentiment doubtless shared by the majority of us.

5) Victory is sweet. I didn’t win, obviously, but I did survive, and according to the official results I was the 59th fastest female(?) to complete the course. Which is news to me. I know my ‘tache isn’t stunning right now(pictures to come when you can actually see it on my face) but come on. 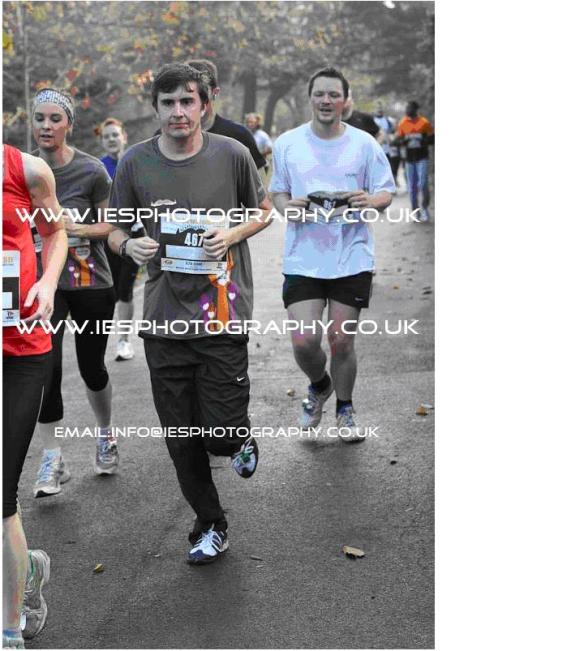 Does this look like the face of a man who is enjoying himself?

In all seriousness though, it was a great day, a great event and a great cause (The mighty Movember in case anybody hasn’t twigged yet). Many thanks to the organisers for putting the whole thing together and the Helping Hands team at work for getting some of us off our lazy arses to do something useful.

And so we come to the actual reason you’re reading this post. Little did you have an inkling, but now I’m going to ask you for money.