Revellers arriving at Glastonbury for days of inebriated mayhem have been shocked to discover that all of their colleagues are there too.

An air of tension hangs over Worthy Farm as festival goers try to reconcile the urge to consume as many narcotics as will fit in them with the need to not expose any genitalia to their line manager, who is camped seven yards away.

Entire reporting lines have sprung up accidentally all over the site, with attendance particularly high among those who claim to work in new media, management consultancy or any form of tech startup. Farringdon is reportedly empty at present.

The situation is especially awkward for the 78% of people who are have told their peers that they are working from home or attending a conference, with many trying to cover their backs by wandering the site and repeating the phrase “this immersive residential course is really going to help me pitch my brand to millenials” to every passer by they encounter. 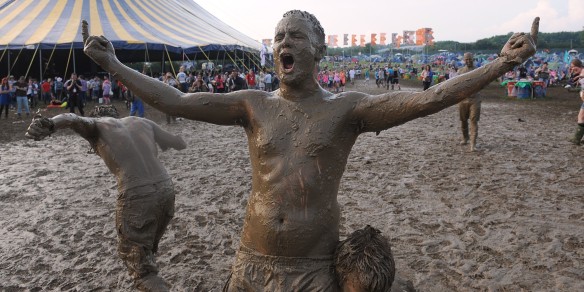 Festival organisers have expressed fears that the inherently twattish culture of the modern British workplace is having a negative effect on the festival.

“We are worried, yes”, admitted organiser Stephanie Sinclair. “Last night there were only 9 people watching Florence + The Machine on the main stage, while we had almost a quarter of a million attempting to watch one woman talk about why Powerpoint is dead and all your deliverables should be presented in the form of contemporary dance. It might be innovative but it’s not exactly Glasto is it?

“What even is a deliverable anyway? I swear these people just make up words.”

Sinclair did concede that there was some common ground between the spirit of the festival and the corporate hordes who attend it.

“There are literally boatloads of drugs, which is obviously a big part of this whole thing. We’re also pretty sure that Kanye West will be a sellout – when he plays music they all start turning to their friends and screaming “THIS IS MY JAM”, thousands of them at a time. I find this confusing, as they’re rarely actually holding jam at the time.”

It is unclear whether behaviours observed at the festival will impact on workers’ day jobs, although there would surely be mass support for any quarterly review that reads: ‘Overall, Gary’s work has been exemplary, but I did see him chewing a tent pole at Glastonbury. I, however, thought I was a dragon and was wearing only ski goggles at the time, so I’m willing to overlook it on this occasion.’

Meanwhile, Sinclair and her team will have to work out how to attract a more diverse crowd to next year’s event.

“We charge hundreds of pounds for ticket, we open the phone lines at 10am – yet we keep ending up with crowds of people who loads of cash and jobs that don’t sound real.”