The Special One, which is apparently an acceptable nickname for an adult but not a child, claimed that the main reasons for his return to Stamford Bridge were his love for the club and the massive cheque, quarry full of golden dubloons and limitless supply of caviar he has been presented with upon arrival. 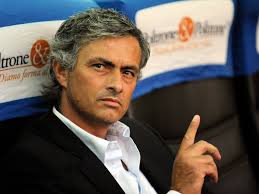 Jose indicates how many thousands of pounds he has earned while you read this caption.

Speaking to the press in a golden suit, surrounded by exotic animals and juggling Faberge eggs, the Portuguese tactician waxed lyrical about his love for the soulless west London outfit.

“There are many things I love about Chelsea. I refuse to elaborate any more on what those things are because I have not had time to make up an acceptable lie yet. Suffice to say I am home, and here to help. And wealthy. Fabulously wealthy.

“There must be some positives about the actual club though. Who’s captain these days? At least that adulterous potential racist and all round buffoon Terry is gone.

“Wait, he’s still here? Oh shit, I want more cash. Well, at least none of my players have ever shot a trainee with an airgun on club property. Wait, what?”

Chelsea fans have reacted with delight at finding out that their new manager is not Rafa Benitez, and have completely forgotten all of the shit that went on last time Mourinho was here as it happened more than 8 minutes ago.

“I remember the last time Mourinho was here”, lied fan Jeff Staines, “It was a magical time of happiness, delight and world peace. And arguments. And childishness. And only moderate success, which given the outlay on players was really the bare minimum expected. And Adrian Mutu.”

Mourinho then left Stamford Bridge this afternoon to relax on his new luxury island, which he purchased with his first hour’s pay.

Meanwhile, industry professionals and rational human beings have agreed that if a mad Russian offered them £10million a year to do a job, they’d probably score their job satisfaction quite highly as well.